Summary of Competition in Currency 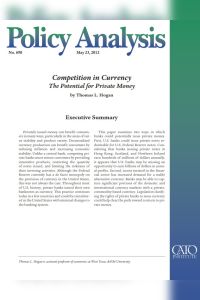 Economist Thomas L. Hogan plows fertile if esoteric soil in examining privately issued banknotes. Drawing from detailed research, Hogan explains how the US’s pre-Civil War “free banking” system enabled pure currency competition and resulted in economic stability, limited inflation and substantial growth. In this report from the generally conservative Cato Institute, Hogan contends that a move away from central banking could benefit US banks and put an end to inflationary policies that have devalued the dollar. Although many argue that emerging technologies and payment systems are making cash obsolete, Hogan constructs an argument for private money and the establishment of a global “commodity-based currency.” getAbstract suggests this thought-provoking report on the unusual subject of the economic and profit-making potential of private money to investors, analysts, and banking and finance professionals.

Thomas L. Hogan, an assistant professor of finance at Troy University in Alabama, is a former research fellow at the Cato Institute and the American Institute for Economic Research, and a former consultant to the World Bank.

The US Federal Reserve holds the monopoly on providing currency for the United States. That was not always the case. Private banks used to issue their own notes. The limited inflation and greater economic stability that a decentralized currency provides could be an important boon to consumers. Banks in Hong Kong, Scotland and Northern Ireland “earn hundreds of millions of dollars annually” by issuing private money. Reintroducing such a system in the US market could mean “billions of dollars in annual profits” for US banks.

The Balance of Competing Banks

Compared to central banks, commercial banks are better equipped with the data and the motivation required to ensure the optimum levels of money supply. A system where competing private banks work together to match the supply of banknotes with demand is ideal because, even when one bank oversupplies, another will undersupply, keeping the system balanced. When a monopoly issuer, such as the Fed, governs the supply, it relies on a single set of experts. But competition lets the free market decide on the proper amount of money in the banking system.

In the past, competing US private banks...

Why Does Everyone Hate MMT?
8
Dance of the Trillions
8
Digital Cash
8
Global Waves of Debt
7

Could Negative Interest Rates in the US Ever Happen?
8