Review of Conscience of a Conservative 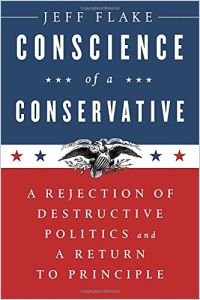 Jeff Flake, a GOP senator representing the red state of Arizona, wades into the charged United States political debate. In this slim volume, Flake argues that President Donald Trump hijacked the Republican Party and conservative values with his populist policies and caustic rhetoric. Trump responded to Flake’s criticism by launching insults, calling Flake “weak” and “toxic.” Flake’s book shares a title with a 1960 work by conservative avatar Barry Goldwater. This current tome landed on The New York Times’s bestseller list, gaining appearances for Flake on television news shows and earning Trump’s derision. Some commentators initially saw Flake’s call for smaller government and a nicer tone as little more than self-serving fantasy, though that line of thinking muted when he announced that he wouldn’t run for re-election in 2018.

The junior US senator from Arizona Jeff Flake is a fifth-generation Arizonan who served in the House of Representatives from 2001 to 2013. He lives in Mesa with his wife and five children.

A crowd of traditional Republicans vied with Trump for the GOP presidential nomination in 2016, and Trump’s conscienceless conservatism vanquished them easily. This perhaps proves that standard GOP prescriptions of lower taxes, freer trade and a smaller safety net might not be the winners Flake believes they are, even with the Republican base. Flake expresses great concern with Trump’s willingness to lie, to change his story and to ignore facts. Yet Flake’s voting record reflects no sharp departure from Trumpism. As of mid-September 2017, Flake had voted with Trump on 91.5% of Senate bills, according to an analysis by the website FiveThirtyEight. Still, in this earnest plea for a more civil brand of public discourse, Flake comes across as sincere and persuasive. A deft writer, he expresses understandable discomfort at Trump’s relentless nastiness.

Trump’s victory marked a stunning rebuke of politics as usual, though Flake seems to spend this entire book longing for a return to the old days. Yet he knows it’s impossible to guess how the 2016 election might have turned out if a traditional conservative like Jeb Bush had won the GOP nomination. Flake calls Trump out for being combative, ideologically inconsistent and prone to lying, but amid all his criticism of Trump, and of Republicans who voted for him, Flake conjures little introspection, though he offers some valuable lessons learned.

Divided Politics, Divided Nation
8
Can It Happen Here?
8
Confronting Iran
7
A Path to War With Iran
7

Jim Mattis: Duty, Democracy and the Threat of Tribalism
7