Summary of Courage to Execute 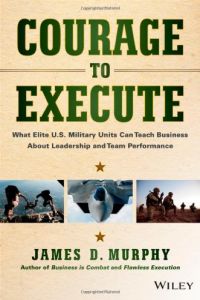 The US armed forces set out to execute their work flawlessly. Former US Air Force fighter pilot James D. Murphy explains how businesses can adapt the military’s time-tested organization, motivation, training and execution tactics. He cites some well-known examples of US military successes: the killing of Osama bin Laden by the Navy Seals; the Air Force’s amazing Thunderbird aerial acrobats; the Rangers, Green Berets and Delta Force special forces; and the amazing Silent Drill Platoon from the Marines. Although Murphy paints with a broad brush, and focuses only on military success, not failures, his work is clear, precise and unambiguous. getAbstract recommends his compelling military examples as lessons in strategic execution.

James D. Murphy, founder and CEO of the training and consulting firm Afterburner Inc., is a former US Air Force F-15 pilot. He also wrote Business is Combat and Flawless Execution.

Companies often execute poorly for a variety of reasons. Talented people who try hard to carry out excellent work in a variety of business functions often end up achieving substandard results, despite their dedication. Many different factors can hamper execution, including “task saturation” and “runaway complexity,” problems firms often try to solve by applying more complexity.

Former US president and army General Dwight David Eisenhower, supreme commander of Allied forces during World War II, warned Americans of the dangers inherent in what he called the “military-industrial complex.” Today, US businesses face the threat of the business-intellectual complex. This multibillion-dollar industry encompasses “books, magazines, seminars and schools,” as well as “articles, experts and dissertations.” The end product is a surfeit of complexity that hurts corporate America.

The US armed forces avoid complexity. The military expects high performance from its members, many of whom are younger than 21 and have only a high school education. The outstanding results these troops attain are hard wrought in the most...