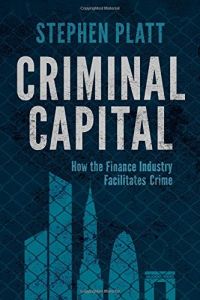 How the Finance Industry Facilitates Crime

Attorney and money laundering expert Stephen Platt’s study of dirty money may remind you of headlines from the 1980s proclaiming that a significant percentage of US currency bore cocaine residue. In today’s increasingly cashless world, Platt suggests, some percentage of the money in your bank account carries the taint of drug trafficking, kleptocracy or bribery. Platt presents a detailed, easy-to-digest guide to illegal cash flows. He outlines the scale of the world’s money laundering problem and explains why the bad guys remain a step or two ahead of the authorities. The book’s title suggests a takedown of big banks, but the financial industry emerges looking no worse than any other sector in which criminals seize every advantage they can. getAbstract recommends Platt’s articulate, compelling study to bankers, policy makers, law enforcement officials and anyone else who seeks insight into this complex, worldwide problem.

At first glance, money laundering may appear to be a bloodless crime. Unlike murder or theft, it seemingly has no victims. Some nations don’t even criminalize money laundering. On further inspection, however, money laundering stands out as a crime that aids and abets nefarious activity around the globe. Drug traffickers are only one of the criminal groups who launder money in the international finance system. Despots, terrorists, pirates, pornographers, hackers, sex traffickers and identity thieves, among others, all try to make their ill-gotten gains appear legitimate.

Criminals typically need the help of savvy lawyers and bankers. Their dirty money often lands on the balance sheets of large banks. The United States vigorously pursues money laundering as a crime. In 2009, the US government fined UBS $780 million for facilitating crime. In 2013, Wegelin & Co., Switzerland’s oldest private bank, shut its doors after pleading guilty to aiding tax evasion. The British government replaced its Financial Services Authority (FSA) with the Financial Conduct Authority (FCA) on suspicion that the FSA was a “watchdog that didn’t bark.”

Attorney and money laundering expert Stephen Platt is an adjunct professor at Georgetown University’s law school and the founder of kyc360.com.