Summary of Crisis Can Spark Transformation and Renewal 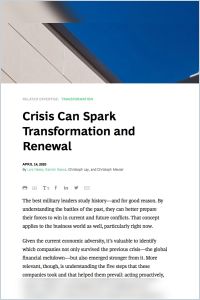 Lessons learned from companies that performed well after the 2008 economic downturn offer leaders valuable guidance in the face of the COVID-19 pandemic. The top post-2008 performers followed five essential steps. According to Boston Consulting Group senior partners Lars Fæste and Ramón Baeza, and the firm’s Christoph Lay and Christoph Meuter, these companies acted preemptively; kept invigorating their business; held to their key goals; had risk mitigation in place; and “streamlined” operations by leveraging technology. Embrace the authors’ discoveries to position your firm for continued good health.

Lessons learned in the 2008 crisis have value today.

The strategies that companies used to overcome the devastation of the 2008 global financial crisis provide valuable lessons for businesses trying to cope with the COVID-19 pandemic.

To understand what companies learned from the financial crisis, Boston Consulting Group (BCG) analysts examined the S&P Global 1200 from 2008 to 2019. By evaluating earnings before interest, taxes, depreciation and amortization (EBITDA) and the total shareholder return (TSR), BCG identified the top 25 performers.

“It’s valuable to identify which companies not only survived the previous crisis…but also emerged stronger from it.”

Their findings revealed that the top tier of companies across numerous industries increased their EBITDA margin by 25% on average, compared to 4% for other S&P Global 1200 companies. Regarding shareholder returns, the top 25 outperformed the competition with an average of 21% annual growth compared to 4%. Although the top 25 organizations underwent a significant decrease in TSR in 2008, they returned to productivity more quickly than other companies.

Recovery from the 2008 crisis occurred in four phases.

During the first recovery period, from 2008 to 2010, these companies dealt with market instability by keeping almost 20% of their assets in cash and cash equivalents. As the market stabilized in 2011 and 2012, they used these funds to operate during low revenue periods.

“They succeeded by tailoring their strategy to the changing macro conditions of each phase.”

When the global economy started moving again, these businesses grew an average of 19.5% during the four years ending in mid-2016. By 2016, these firms had positioned themselves to acquire other companies and reinvigorate their core areas.

Five actions were central to the strategies of the companies that performed best after the downturn.

“The top performers built organizations not only to withstand future shocks but also to anticipate them.”

Their experiences may offer worthwhile guidance for managing the impact of the coronavirus pandemic on the well-being of your business.

Lars Fæste, in Hong Kong, and Ramón Baeza, in Madrid, are Boston Consulting Group managing directors and senior partners. Christoph Lay is a Global Business Director in Düsseldorf, where Christoph Meuter is a Senior Knowledge Analyst.

The Science of Change
9

Five Ways to Win in China’s Changing Mobility Market
9
Digital Powers Value Creation in Oil and Gas
8
The Pandemic Puts a New Premium on Performance
8
How Will COVID-19 Affect Machinery and Industrial Automation?
8
Reinvention Paves the Way to a Bright Future
8
What Companies Can Learn from World Leaders in Societal Impact
8