Summary of Deaths of Despair and the Future of Capitalism 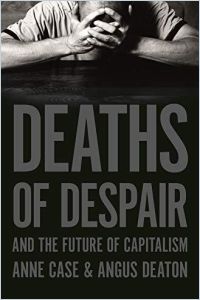 In the fairy-tale version of America, life just keeps getting better. But prominent economists Anne Case and Angus Deaton have been poking a hole in that story. In 2015, they reported that US life expectancies and mortality rates had taken an unexpected turn for the worse. Now Case and Deaton further delve into those initial findings, and they conclude that the financial setbacks wrought by globalization have metastasized into health woes and social problems. The authors describe a bleak divide in US society that should concern all Americans.

White Americans, and white men in particular, are struggling.

The US labor market has grown less welcoming to uneducated workers. From 2010 to 2019, the American economy created nearly 16 million new positions. However, less than three million of those jobs went to workers without college degrees. For white men without bachelor’s degrees, inflation-adjusted wages fell 13% from 1979 to 2017.

These statistics might sound dry and bloodless, but they carry real-world implications: Work provides people with pride and self-respect. For past generations, even a dirty, dangerous job in a factory or a mine provided a sense of identity and dignity. As those jobs have disappeared, many workers’ ties to their communities have frayed. Unemployed white men are undesirable marriage partners, further undermining their social standing and mental health.

Throughout the 20th century, Americans could count on living longer than their parents, as medical advances became perhaps the seminal achievement of modern times. But it wasn’t just lifespans that were increasing...