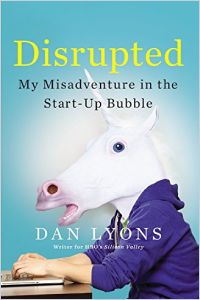 Former magazine writer Dan Lyons’s memoir about his midlife career switch from journalism to tech marketing is a hilarious fish-out-of-water story with dark overtones. After losing his job at Newsweek at age 51, Lyons took a job with the Cambridge, Massachusetts-based software developer HubSpot. Lyons, now a writer for the HBO series Silicon Valley, is a witty, sarcastic observer. He finds plenty of comedy in his clashes with an ostentatiously upbeat corporate culture that he describes as a cross between a preschool and a cult. He exposes the technology industry’s pervasive ageism, an atmosphere where employees become expendable at 50. As Lyons follows HubSpot’s quest for an IPO, he explores the deranged economics of the dot-com bubble, in which founders and investors can take money-losing companies public and walk away with millions. getAbstract recommends this fun autobiographical account to entrepreneurs, investors, tech marketers and career changers who don’t mind laughing and cringing at the same time.

A former writer for the HBO series Silicon Valley, Dan Lyons is a columnist at Fortune magazine and a frequent corporate speaker on management and work culture.

In 2012, like a growing number of middle-aged professionals, Dan Lyons lost his job. He’d been a tech-business reporter at Newsweek, which, like other stalwarts in print journalism, struggled in the era of the Internet. At 51, Lyons had suddenly become what Newsweek dubbed the “Beached White Male”: a formerly successful man who loses his job in the recession and can’t find another in a new economy that is unfriendly to older workers.

Lyons, who had been with Newsweek since 2008, received only two weeks’ notice and no severance package. He lost his corporate health insurance. With a family to support and in a panic that he might never work again, Lyons bolted into a round of frustrating interviews and a brief, unhappy stint at a small tech-news blog.

He spotted an ad on LinkedIn: HubSpot, a tech start-up in Cambridge, Massachusetts, sought a “content creator.” He interviewed with the founders, CEO Brian Halligan and chief technology officer Dharmesh Shah, and with the chief marketing officer, whom he nicknamed “Cranium.” He liked them and accepted a position as a “marketing fellow.” He wasn’t sure what the title meant but...