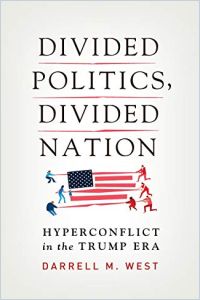 Polarization and downright hatred seem to characterize American politics nowadays. While some believe this state of affairs is a direct result of Trump’s presidency, Darrell M. West of the Governance Program at the Brooking Institution argues that cultural, economic and political developments laid the groundwork for social divides decades before Trump entered the scene. Drawing on his personal experience of growing up in a conservative community before moving into the liberal world of Brown University, West lays out key factors that have contributed to the polarization of modern American society.

Darrell M. West is the vice president and director of governance studies at the Brookings Institution and author of several books on economic and political change and the implications of technological advancement.

Political, cultural and economic upheavals over the last half century have made America more polarized and intolerant.

The polarized and antagonistic attitudes seen in American society today are the result of decades of political, cultural and economic change. The Cold War; the rise of China as an economic superpower; the advancement of technology and its impact on jobs; the legalization of same sex marriage; the rise of fundamentalism and terrorism: All of these factors are part of the reason why American society has changed from the famous “melting pot” to an “us versus them” population.

In the decades following Ronald Reagan’s election, US society split more and more along party lines.

In 1994, when Republican Newt Gingrich became Speaker of the Senate, he highlighted and used issues like gay rights, evolution and abortion – all topics that religious conservatives, particularly those in small-town America, felt strongly about – to emphasize differences between the two political parties and spark infighting among Democrats. Bill Clinton’s affair with Monika Lewinsky further cemented the negative view these conservatives...