Summary of Divided We Stand 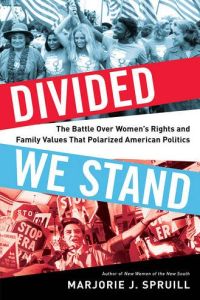 The Congress of the United States passed the Equal Rights Amendment (ERA) in 1972 with broad bipartisan support. But supporters’ hopes for ratification by the states fell apart by 1980. A small but mighty army of female, religious conservative activists organized by right-wing spokeswoman Phyllis Schlafly led the opposition. She charged that the ERA would take privileges away from American women and would undermine “family values.” Women’s history scholar Marjorie J. Spruill meticulously reconstructs the 1977 International Women’s Year (IWY) Commission process and its controversial conference at which Schlafly emerged as a leader. Spruill’s attention to detail may make the book longer than it needs to be, but her story of the fight over the ERA and how Schlafly skillfully rendered “feminism” a dirty word for decades is fascinating. The family values coalition has defined the Republican Party ever since. Noting that the opinions expressed are those of the author, getAbstract recommends this revealing history to women across the political spectrum, political organizers and those who study US history.

University of South Carolina women’s history professor Marjorie J. Spruill also wrote New Women of the New South and is an editor for the Journal of American Studies.

President John F. Kennedy established a Commission on the Status of Women in 1961. It issues a report in 1963 reporting that most women were homemakers, but they were living longer and joining the workforce in larger percentages. The report called for women to participate more in public life, supported practical proposals such as affordable child care, and highlighted special challenges confronting poor women and women of color. It led directly to the Equal Pay Act of 1963 and to Congressional approval of the Equal Rights Amendment in 1972.

By 1967, all 50 states had women’s commissions. These commissions and groups like the National Organization for Women (NOW) fostered a growing network of politically active women. Ratification of the ERA was a bipartisan goal and passage seemed inevitable.

The IWY Commission recommended bringing more women into the professions...