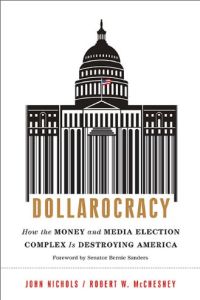 The US Supreme Court’s 2010 Citizens United decision made many Americans aware of the influence that money has on their nation’s political processes. Journalist John Nichols and professor Robert W. McChesney contend that undemocratic corporate influences have been taking over politics for years. They lay out a convincing case that the demise of campaign-finance reform, the ascendancy of “digital politics” and the sad state of American journalism combine to remove governance from the hands of the people and put it squarely in the laps of corporate bigwigs. Nichols and McChesney believe that only massive reform will save democracy. They thoroughly cover what they think money can – and, fortunately, cannot – buy. They sometimes engage in false equivalencies (e.g., that both American parties are the same) that weaken their arguments. They also don’t acknowledge that the digital campaign methods they abhor could help Americans organize the reform movement they advocate. While always politically neutral, getAbstract recommends this instructive investigation to all Americans who want to understand how their government works and why their voices should matter.

In a democracy dominated by corporate interests and money – a “Dollarocracy” – citizens feel separated from and helpless within the political process. As a result, voter turnout gradually declines. The United States is close to becoming a total dollarocracy. While some pundits claim that President Barack Obama’s re-election in 2012 was comforting evidence that wealthy interests did not prevail, in reality, “Big Money” won and lives to fight another day.

One of the main reasons that the US trends toward a dollarocracy is that the Constitution does not assure a citizen’s right to vote. The Founding Fathers extended the franchise only to property-owning white men. From the beginning, special interests had the opportunity to dominate. With time, more citizens won the right to vote. But, by the 1870s and 1880s, rich corporations began to exert huge influence on politics and policy. Alarmed, progressive journalists and social reformers fought back. Their movement led to “groundbreaking reforms”: “food and drug protections, regulation of wages and hours, workplace safety initiatives, and the banning of child labor.”

Make Trouble
8
Can It Happen Here?
8
Good and Mad
9
The Fixer
8
The Book of Gutsy Women
9
Dear Madam President
8