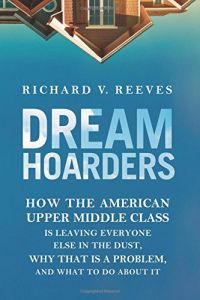 Most discussions about increasing economic inequality in the United States focus on the disparity between the top one percent and the rest of the population. But as Brookings Institution fellow Richard V. Reeves points out, the upper middle class is separating from the rest of society at an alarming rate. The upper middle class, which makes up the top economic quintile along with the very wealthy, now holds more than 50% of the nation’s wealth. What’s worse, the top 20% has constructed a highly effective “glass floor” that protects its members from a precipitous fall into the middle class or lower. Reeves shows how the upper middle class wields such tools as exclusionary zoning laws, legacy preferences in college admissions and unpaid internships to shield itself against competition from below. As a member of the upper middle class himself, Reeves is able to reveal these unfair practices without sounding like an anticapitalist ideologue. And he enlivens this relatively dour subject with generous doses of dry wit. This study will benefit policy makers, education reformers, social reformers and labor advocates, and it may spark some soul-searching among the more fortunate.

Critiques of growing economic inequality in America may be missing a large part of the picture. Economists and policy makers have focused on the disparity between the richest one percent and the rest of the population.

But an often-overlooked and possibly more important story may be the widening gap between the top 20% – which includes the upper middle class – and the remaining 80% of the population. Not only is the top quintile holding a rapidly increasing share of the nation’s wealth, but those at the top have been able to shield their status from competition and to pass it on to their descendants.

The Landscape of Inequality

The US sees itself as a classless society. The implicit promise of the American Dream is that anyone who works hard and acquires skills can rise in the economic hierarchy. The US lacks formal mechanisms of class structure, such as inherited titles, but Americans have nevertheless constructed a rigid class system and have come up with effective means for passing upper economic status on to successive generations.

The top quintile of the American financial hierarchy includes not...

The Third Pillar
8
Squeezed
8
The Future of Work
9
Divided Politics, Divided Nation
8
From We Will to At Will
7
Deaths of Despair and the Future of Capitalism
8