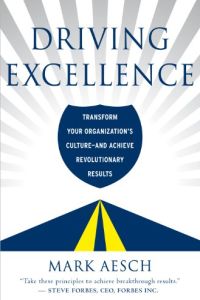 Mark Aesch, now CEO of the Rochester Genesee Regional Transportation Authority (RGRTA) in New York, grew up on a farm. The lessons of hard work and sacrifice he learned as a youngster – as well as the practice he gained in setting priorities (for example, feed the cows before you eat) – proved instrumental in his success at RGRTA. When he took over the public agency, it was dysfunctional, sloppily run and grossly inefficient, with a $27.7 million deficit.

On his first days on the job, advisers told Aesch that RGRTA’s survival depended on increasing overall bus fares by 40% (and by 200% for disabled riders), scaling back passenger service by 65%, and cutting the workforce by approximately 25%. Aesch would have none of it. Instead, he boldly revamped the bus company’s perverse, self-defeating culture, and made superior execution and top-flight service its primary goals. RGRTA eliminated wasteful bus routes, increased the average number of passengers and cut back overtime pay. Aesch made the tough decisions necessary to save the agency.

RGRTA dramatically changed its approach. Today, it operates with a $19.7 million...