Summary of Earning It 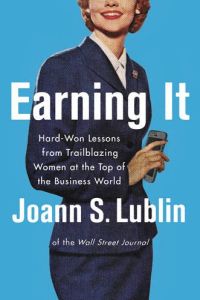 Lifelong journalist Joann S. Lublin shares an important trait with the 52 female executives she interviewed: They all pushed through multiple barriers to succeed as women in their respective fields. Their stories provide first-person guidance, especially those from the 65% of interviewees who are past or current public company CEOs. In this well-structured if sometimes repetitive collection, Lublin ties the narrative together with relevant statistics and “Leadership Lessons.” getAbstract recommends her compilation to women who are focusing on moving ahead in their careers, and to men seeking to understand the challenges that women face in the workplace.

Pulitzer Prize winner Joann S. Lublin is management news editor of The Wall Street Journal. In 1969, she became the paper’s first female summer intern for its Washington bureau. In 1971, she was the first woman hired as a reporter for its San Francisco bureau and she later created the paper’s career advice column. She shared its 2003 Pulitzer Prize.

The 1963 Equal Pay Act and the 1964 Civil Rights Act helped even the playing field for American women, but these laws didn’t eliminate sexism. More than 40% of women report having encountered gender-based discrimination. Women are still chipping away at the glass ceiling, a term magazine editor Gay Bryant coined in 1984 to describe women stuck at the upper ends of mid-management and unable to break through to the top tiers. By 2014, almost 39% of US workers were women, up from 25% a quarter-century earlier. In 2013, women earned 78 cents for every dollar men earned, up from the 1980 rate of 60 cents per dollar.

In 1972, Katharine Graham of The Washington Post Company became the first woman leader of a Fortune 500 company. By 2013, 14.6% of Fortune 500 businesses had female executive officers. Experts predict that more than 100 years will pass before equality between the genders reaches the highest levels of business.

Executives emphasize the importance of tenacity and of stepping beyond your comfort zone to push through obstacles and open doors at the beginning of ...