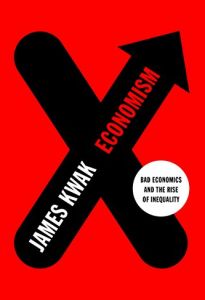 Bad Economics and the Rise of Inequality

The review below was first published in the getAbstract Journal on Jul 22, 2020.
We’ve reviewed this title for you as we currently cannot offer a summary.

Cutting Through the Hokum

How does what you learned in Economics 101 apply to real life? James Kwak finds that it doesn’t apply at all, except in service to the wealthy and powerful.

In his erudite analysis, James Kwak explains “economism” – an ideology based on oversimplified but otherwise credible ideas that further the interests of the powerful – and he tells how its current version has spread from academia to politics to mass media. He emphasizes that economism produces inequalities, and his revelations of how it dictates US policy are eye-opening. Kwak seeks to unteach what Economics 101 likely taught you – that certain economic theories are valid in the real world and help keeps economies in balance. Kwak thinks that is absolute nonsense.

Experts agree with Kwak. For example, Lawrence Lessig, the Roy L. Furman Professor of Law and Leadership at Harvard Law School, said, “No book better frames this pathology or better supplies the resources for resisting it.” Jacob S. Hacker, the Stanley B. Resor Professor of Political Science at Yale University, said, “Kwak has written the myth-buster that our distorted economic debate needs.” Hacker went on to say that Kwak is also fun to read, praise few economists garner.