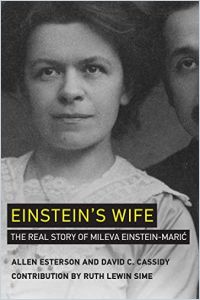 Albert Einstein’s first wife, Mileva Marić, also studied physics – rare for a woman in Europe in her day. She and Einstein met as students and wed before he published on relativity in 1905. Allen Esterson and David C. Cassidy detail Marić’s life, her college life (and grades), and her career and marital struggles. Despite the book’s awkward structure – one writer starts it, another finishes it and a chapter on women scientists splits it – the authors bring Marić’s youth, schooling and tragic life to light and explore how much she did – or didn’t – contribute to her husband’s work.

Mileva Marić – pronounced Mar-itch – studied mathematics and physics in Europe alongside her husband, Albert Einstein, author of the theory of relativity. In time, his Nobel Prize paid for their divorce.

Marić came to public view with the publication of The Collected Papers of Albert Einstein in 1987. The section on his youth, covering 1879 to 1902, includes the first publication of 51 letters Einstein wrote to her. The collection’s publication also drew attention to a 1969 Marić biography by Serbian science professor Desanka Trbuhović-Gjurić titled In the Shadow of Albert Einstein: The Tragic Life of Mileva Einstein-Marić. The biography argues that Mileva Marić’s proficiency in mathematics surpassed Einstein’s and that she was an unrecognized co-author of his relativity paper. However, no verifiable evidence backs this claim.

Where Are the Women?
8
Immune System, Unleashed by Cancer Therapies, Can Attack Organs
9
Why Emergency COVID Vaccine Approvals Could Pose a Dilemma
9
The Intelligence Trap
9
The Bias Detective
9
How Science Beat the Virus
9