Summary of Emerging Disease in a Changing World 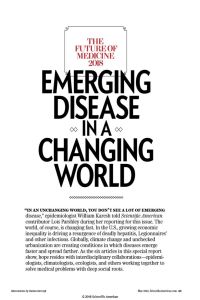 Despite medical advances, infectious diseases are on the rise worldwide. Climate change and urbanization are key factors precipitating the spread of disease. In the United States, poverty is the main cause for rising infection rates. In addition, climate change contributes to the spread of disease. The Rift Valley virus in South Africa is a case study. Rising infection rates are caused by a complex interplay between human and environmental factors. getAbstract recommends these articles to anyone concerned with health and the best way to combat future epidemics.

Infectious diseases are on the rise in the United States.

Despite mass vaccination programs, better sanitation and improved medical treatments, the United States has seen its rates of infectious diseases increase. Detroit is currently battling the largest hepatitis A outbreak since the first hepatitis A vaccine in 1995. Population centers in five other US states, including San Diego, California, are also experiencing a steady and continuous outbreak rare in the developed world. In San Francisco, meanwhile, rates of gonorrhea climbed by 22% between 2015 and 2016. In New York City, the water-borne Legionnaires’ disease made a comeback in 2017, while infection rates for cyclosporiasis, a pathogen found in contaminated drinking water and pools, nearly doubled between 2015 and 2016.

The main cause of rising infection rates is economic inequality.

Compared to other developed countries, the United States has one of the highest levels of income inequality. People at the bottom of the income ladder are much more susceptible to infectious diseases. They tend to live in more crowded conditions, such as in densely-populated...

Plagues and the Paradox of Progress
8

Are We Prepared for the Looming Epidemic Threat?
8
Eradication
9
Bad Advice
9