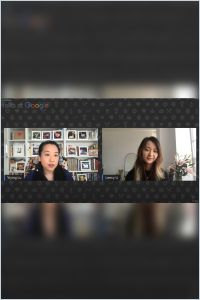 In this talk, moderated by Google’s Senior Interaction Designer Leecy Li, award-winning artist, entrepreneur and educator Yiying Lu talks about how organizations can use the intersection of art, technology and business to innovate and create value for their customers. As Lu explains, the increasingly globalized world means that cross-cultural innovation is more important than ever before. If organizations hope to appeal to customers from a wide variety of backgrounds, they must use their products, messaging and delivery to create a sense of community, tell stories and problem-solve.

Yiying Lu was named to Fast Company’s Most Creative People in Business and Microsoft’s Top 10 Emerging Leaders in Innovation, and won a Shorty Award in Design. She currently runs her global innovation studio, serves as a San Francisco Arts Commissioner and is a member of the San Francisco Center for the Book and Global:SF. Moderator Leecy Li is Senior Interaction Designer at Google.

Art can take something functional and make it engaging.

Why does art matter in the realms of business and technology? As an entrée to this topic, consider two examples, from days past, of website “failure to load” pages: the blue “screen of death,” full of text explaining, in technical jargon, the error taking place; and the Twitter “Fail Whale,” which depicts a flock of birds lifting a whale, accompanied by a simple “Twitter is over capacity” message. Both of these pages served the same purpose of informing users of a problem. But unlike the blue screen, the Fail Whale not only conveyed its message; it became a cultural phenomenon.

Initially, Yiying Lu, who created the Fail Whale, didn’t know how to feel about her art being connected with the idea of failure. Soon, however, she began to see, and feel inspired by, the ways her image sparked users’ own creativity. Conan O’Brien even asked Lu to create a version of her design for his new show on TBS – which, riffing on the comedian’s very fair complexion, they dubbed the “Pale Whale.”

The Fail Whale became a means by which Twitter’s global user base...

Exploring Personal Projects
9
Dear Wonder Woman, You Are Not Alone
9
The World in 2020
7