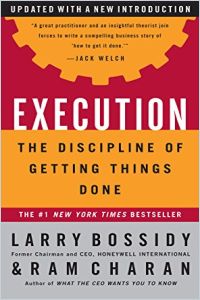 Most companies, like most individuals, excel at making plans, but are not as talented when it comes to actually carrying them out. Thus, execution - the ability to get things done, particularly on a strategic level - has become the sine qua non of management science. Authors Larry Bossidy and Ram Charan observe that some people grow when promoted to executive leadership, while others merely swell. Those who lose touch with the operational realities of their businesses soon find themselves boldly leading a company going nowhere. The practical value of achieving objectives and getting things done must be instilled at every level of your company, and injected into the very DNA of your corporate culture. Anything less, and your company will under perform. Bossidy and Charan have sterling credentials when it comes to getting things done for America’s leading corporations. They say execution is nothing more than faithfully practicing the right techniques with a disciplined approach. getAbstract recommends reading this book to help you turn your plans and strategies into accomplishments and victories.

Larry Bossidy is chairman and former CEO of Honeywell International. He is the former CEO, COO or vice chairman of three other major American corporations, including GE. Ram Charan is an adviser to CEOs and senior executives. He is the author of What the CEO Wants You to Know and Boards at Work. He taught at the Kellogg School of Northwestern University and the Harvard Business School. Charles Burck is a former Fortune magazine editor, writer and author.

The Art of Getting Things Done

When Larry Bossidy stepped down as vice chairman of General Electric (GE) in 1991 to become chairman and CEO of AlliedSignal Corporation, his new company appeared healthy. In reality the automotive, engineering and aerospace company had a serious problem: it lacked a "productivity culture" and it wasn’t getting things done.

Bossidy’s description of AlliedSignal’s dilemma could fit any number of corporations: "The processes were empty rituals, almost abstractions. People did a lot of work on them, but very little of it was useful. The business unit strategic plans, for example, were six-inch-thick books full of data about products...People were holding the same jobs too long, and many plants were run by accountants instead of production people."

By the time AlliedSignal merged with Honeywell in 1999, Bossidy’s team had made execution part of AlliedSignal’s corporate DNA. Operating margins had tripled and the company’s return on equity had risen from 10% to 28%. Shareholders rejoiced. So how did the transformation occur? Bossidy’s answer is simple: "We created a discipline of execution."

The ability to execute, to get things...