Summary of Explainer: Nine ‘Tipping Points’ that Could Be Triggered by Climate Change 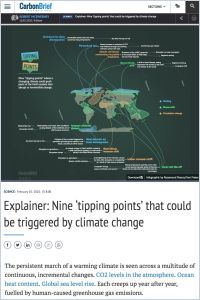 Global warming is moving our planet’s essential systems toward tipping points, where minuscule changes can produce irrevocable damage. Most scientists agree that a tipping point designates an abrupt change when an environmental system is forced across a threshold from which it can’t recover, causing significant, sometimes permanent destruction. Disappearing glaciers, increased droughts, sea level rise and hotter temperatures are warning signs. The process may take decades or centuries, but once the tipping begins, it can’t be stopped.

The AMOC system is part of a global network of water and heat circulation. Warm water flows from the tropics northward to Europe. There the water cools, sinks and moves back toward the equator. Global warming heats the water and dilutes it with freshwater runoff, mainly from Greenland’s ice sheet. The lighter fresh water can no longer sink, so circulation slows down. Research suggests a 15% weakening of the AMOC system since the mid-20th century.

Some projections indicate a complete shutdown within 100 years, triggering catastrophic climate impacts on Earth’s northern hemisphere. Colder temperatures and less rainfall will cause loss of farmlands, and massive sea life die-offs. These effects are almost certain if global temperatures rise 3 to 4°C [5.4 to 7.2°F].