Summary of Facebook, QAnon and the World’s Slackening Grip on Reality 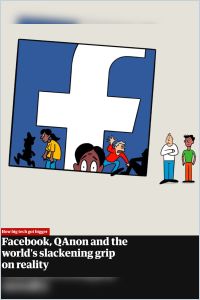 People coped with the coronavirus pandemic lockdowns in different ways, but just about everyone spent more time online. Some played video games, but with the help of social media, others got sucked into QAnon’s alternate reality of fear, paranoia and conspiracy. Though Facebook has tried to limit the spread of toxic disinformation, once people are in QAnon’s alternative reality, leaving is hard. The best way to get out of QAnon’s ”rabbit hole” and stay out is for other people to snap you back into the real world. Alex Hern’s article in The Guardian provides much-needed insight into how otherwise sane people can get drawn into conspiracies that are by turns deranged and dangerous.

Alex Hern is the UK technology editor for The Guardian.

QAnon began as a straightforward conspiracy theory, then became a “collective delusion.”

QAnon started when 4Chan users began reading hacked Democratic Party emails and claimed the messages implied the existence of an elaborate child sexual abuse conspiracy at a pizza restaurant in Washington, DC. A year or so later, a 4Chan user calling himself “Q Clearance Patriot” claimed he had inside knowledge of a “deep state” conspiracy against Donald Trump’s presidency. The user’s growing following called him “Q” and called his movement “The Storm,” in reference to the saying “the calm before the storm.” The original QAnon conspiracies all supported Donald Trump one way or another.

Many QAnon followers maintain their loyalty to it as a vehicle for supporting Trump. But the web of fantasies and conspiracies associated with QAnon eventually expanded far beyond Trump and now includes a wide-ranging, bewildering mishmash of topics, including Atlantis, Egyptian Pharaohs, American CEOs, Julius Caesar, Google head Eric Schmidt, the knights of Malta, 5G, the Fukushima nuclear meltdown, antisemitic attacks on George Soros and citations from the antisemitic screed, “Protocols...

The Enduring Lure of Conspiracies
8

In 2020, Disinformation Broke the US
9
The Mainstream Media Won’t Tell You This
8

You Can Handle the Post-Truth
8

Coronavirus in China Fuels Crowd Psychology
8
How Are We Feeling?
8