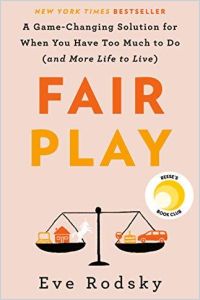 The lion’s share of household responsibilities fell to Eve Rodsky after giving birth to her first child. She felt exhausted and overextended. The experience prompted Rodsky to create a system to rebalance the domestic workload. Based on hundreds of interviews with couples, extensive research into domestic inequality and input from an array of experts, she, with the help of her friends, created Fair Play, a life-management system that rebalances domestic responsibilities, and creates more efficiency and harmony within your home.

After becoming mothers, many women take on the lion’s share of the domestic workload.

When Eve and Seth married, Eve was a lawyer and a financial adviser focusing on philanthropic donation strategies. After giving birth, however, Eve became the “she-fault” parent when she took a three-month maternity leave while her husband returned to work. From home, Eve took care of the baby, and everything else – including laundry, meal prep, cleaning and running errands.

Near the end of her maternity leave, Eve tried to negotiate a more parent-friendly work schedule, but her company declined to let her shorten her workweek or work from home. Eve left her dream job to consult from home. She did all the domestic chores, cared for the baby and worked. She and Seth never pre-negotiated the shift in workload.

Eve shouldered the mental load of tracking household duties, worked a “second shift,” before and after her own work day, and took on the “emotional labor” of managing family relationships.