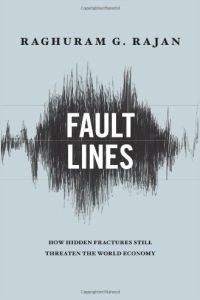 Dismissing the 2008 recession as an inevitable free market setback might seem simple, but economist Raghuram G. Rajan doesn’t take the easy path. He makes a compelling case that the weak links in the global economy remain both visible and fixable. In a provocative analysis unhindered by ideological boundaries, Rajan argues against such government interventions as propping up the U.S. housing market. Yet he urges Americans to create a more generous safety net for unemployed workers facing a “jobless recovery.” Rajan’s more challenging suggestions, such as rebalancing the international economy or changing global monetary institutions, may not shift policy makers’ actions, but he argues persuasively that failing to do so will mean deeper fault lines in the next crisis. getAbstract recommends his book to those who want a clear-eyed economic analysis.

Raghuram G. Rajan teaches finance at the University of Chicago Booth School of Business. The former chief economist at the IMF, he won the 2003 Fischer Black Prize.

The Cracks Beneath the Global Economy

For all its sophistication and complexity, the world economy is filled with weak spots, or “fault lines,” that are invisible in good times but become painfully obvious during a crash, such as the recession of 2007 to 2009. One such fault line is the United State’s growing income disparity, as illustrated by top earners’ widening share of annual earned income. In 1976, the top 1% of households “accounted for only 8.9% of income.” That soared to “23.5% of the total income generated” in the U.S. by 2007. Incomes for median-wage earners, such as factory workers, have stagnated. High wages are not inherently wrong; they’re a powerful economic incentive that pushes talented, enterprising people to take on valuable pursuits. Yet income stratification creates the danger that workers will begin to think that luck or connections, not work, lead to success.

Other U.S. fault lines include the weak safety net for the jobless and the government’s insistence on propping up the housing market. These fault lines are more visible in a global, interconnected economy, where central bankers’ decisions in Washington affect Japanese consumers and London...