Summary of Fight the Pandemic, Save the Economy 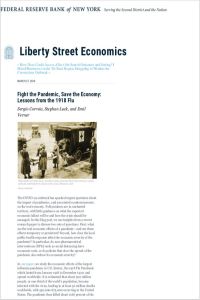 Many business leaders and politicians worry about the financial pain the COVID-19 crisis is inflicting on the US economy. But do public health policies like social distancing and quarantines worsen a downturn? In this brief research note, economists Sergio Correia, Stephan Luck and Emil Verner examine what happened during and after the 1918 flu pandemic for clues about COVID-19’s eventual economic impacts. They conclude that healthy people and a healthy economy are both possible.

The 1918 influenza outbreak offers insights about the potential duration and severity of COVID-19’s economic damage.

Public health policies to stop the spread of COVID-19, such as social distancing, quarantines and business closures, have reduced economic activity, but the disease’s longer term impacts are unknowable. Studying the 1918 influenza pandemic may offer some insights. That health crisis, which claimed anywhere from 550,000 to 675,000 American lives between January 1918 and December 1920, was the largest flu outbreak in US history.

“Our evidence implies that it’s the pandemic and the associated spike in mortality that constitute the shock to the economy.”

The responses to COVID-19 today – lockdowns, public assembly prohibitions, school closings and others – are similar to those put in place a century ago, though major cities inconsistently implemented the policies back then. Following the pandemic, municipalities experienced varying economic recoveries.

Data show an economic decline across the United States as a result of the 1918 outbreak, affecting both supply and demand and resulting in increased unemployment and credit defaults. Industrial output declined, as did the demand for durable goods.

“Cities that intervened earlier and more aggressively experienced a relative increase in real economic activity after the pandemic subsided.”

Between 1919 and 1923, the downturn was steeper and longer lasting in those cities with the greatest exposure to the disease, judged by death rates. Lower mortality rates translated to quicker economic recovery after the outbreak ended, reflected by more jobs, greater output and increased bank assets.

The earlier and stricter the public health interventions, the quicker and more robust the economic recovery.

The 1918 outbreak first affected cities in the eastern United States. As the pandemic spread, western locales learned from their predecessors’ examples and acted more rapidly to implement strict containment measures. Setting aggressive policies earlier and for longer periods of time paid off. Those centers adopting lockdown policies 10 days ahead of time saw about 5% more manufacturing jobs after the outbreak than other locales. Maintaining public health interventions for 50 extra days increased employment by 6.5% during the recovery.

“Findings suggest that pandemics have substantial economic costs, and [interventions] can lead to both better economic outcomes and lower mortality rates.”

Taiwan and Singapore are two countries that quickly put in place COVID-19 interventions. In doing so, they seem to have dampened not only the health crisis but also its adverse economic effects. Although public health policies directly target mortality reduction, they may also indirectly flatten an economic decline.

An Effective Economic Response to the Coronavirus in Europe
7
Only Saving Lives Will Save Livelihoods
8
The Long Economic Hangover of Pandemics
8
Global Socio-Economic Losses and Environmental Gains from the Coronavirus Pandemic
7
How is COVID-19 affecting US trade?
8
The Rich Cut Their Spending. That Has Hurt All the Workers Who Count on It.
7