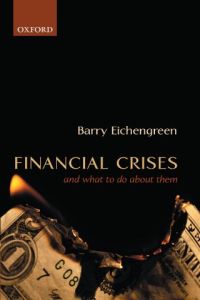 Barry Eichengreen, one of the world’s foremost economists, presents an illuminating, footnote-rich, reflection on the nature of financial crises and the need for systemic reform. Heretofore, official responses to financial crises have often made the problem of systemic vulnerability even worse. International Monetary Fund (IMF) bailouts of developing countries in crisis increase moral hazard by taking the pain of the consequences away from lenders and investors. The IMF effectively allows such investors to reap upside gains from risky ventures while they place responsibility for losses on the IMF itself. Market discipline needs to be the first line of defense against policies and practices that lead countries into crisis. But many political, institutional and financial players resist needed reforms. getAbstract.com congratulates Eichengreen for doing an excellent job of exploring what is necessary and distinguishing it from what is possible.

Barry Eichengreen is the George C. Pardee and Helen N. Pardee Professor of Economics and Political Science at the University of California, Berkeley. He is also the author of several other books on economics, including Globalizing Capital, Capital Flows and Crises, Toward a New International Financial Architecture and Golden Fetters.

Many developing countries have been hit by financial crises since the early 1980’s. Examining four major emerging market crises — Latin America (1982-83), Mexico (1994-95), Asia (1997-98) and Russia (1998) — offers a way to explore the impact of globalization on national and regional financial fragility.

This crisis, which began in Mexico in the summer of 1982, spread to most of Latin America and many other developing countries. The trauma arose from a huge increase in foreign debt and large current account deficits, both financed by banks reporting to the Bank for International Settlements (BIS). Western banks created a borrower’s market and hedged their risks by issuing variable interest rates.

When interest rates rose in the early 1980s, borrowers could no longer repay even their interest. A sudden flight of capital from Latin America, just as lending banks refused to renew short-term debt, triggered the crisis. Western officials instantly realized that a moratorium on debt repayment would threaten the stability of the Western banking system and granted emergency credits and ...

And the Weak Suffer What They Must?
8
The Financial Crisis and the Free Market Cure
7
Straight Talk on Trade
8
Cracking the Emerging Markets Enigma
7
Moneyland
8
Too Smart for Our Own Good
8