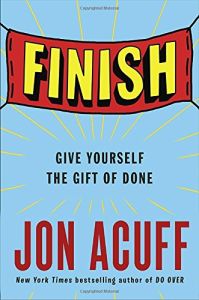 Give Yourself the Gift of Done

Setting new goals is easy, but finishing them is hard. In this blockbuster bestseller, blogger and popular speaker Jon Acuff shares his plans to help you actually achieve your goals. Acuff explains that perfectionism, the main blockade to reaching your objectives, delivers a negative message: the lie that something isn’t worth doing unless it’s perfect. People also fail to reach their goals because they set targets that are too ambitious. Acuff advises cutting your goal in half, breaking it down into smaller, more achievable chunks. He also advocates doubling your timeline, choosing how you will fail and making your goals enjoyable. You’re more likely to finish tasks that are fun, exciting and easy. Acuff goes off on long tangents, but his stories remain funny and relatable. getAbstract recommends his guidance as a helping hand for everyone who ever sought to complete a goal and just fell short.

Getting started is hard, but it’s easier than finishing. You may have a bunch of half-finished projects and other half-done stuff. Many people make New Year’s resolutions, but research says that 92% of these intentions falter and fail.

Best-selling author Jon Acuff believed that he hadn’t been trying hard enough to finish what he started. He thought he was too lazy, or lacked hustle or “grit.” He even created an online video course called “30 Days of Hustle” to challenge people and help them to achieve their goals.

Then University of Memphis researcher Mike Peasley asked to use Acuff’s course to analyze goal setting. Peasley surveyed more than 850 participants and found that those who finished the course were 27% more likely to achieve their goals compared to their attempts prior to finishing the course. Peasley also discovered that “the less that people aimed for perfect, the more productive they became.” Perfectionism kills momentum and keeps people from completing their goals.

“The Day After Perfect”

Jon Acuff, a New York Times best-selling author, and a public speaker and blogger, also wrote Start, Quitter and Do Over.

Everybody Has a Book Inside of Them
6 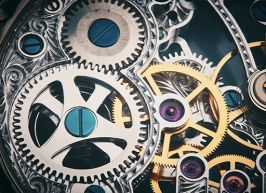