Summary of Firms of Endearment 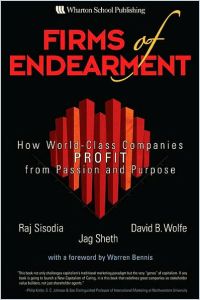 Authors Raj Sisodia, David B. Wolfe and Jag Sheth contend that as U.S. society becomes more concerned with caring, responsible practices, businesses are becoming more aware of serving the society around them, rather than being motivated only by profit. More companies now are building corporate cultures around humanistic values. They provide equal service to each stakeholder group: society, employees, customers, partners and investors. This creates lasting loyalty and even earns a profit. Despite a bit of jargon, the book paints an idyllic but desirable business portrait. Readers might even see its optimism and altruism as a balance to the prevailing negativity. getAbstract suggests this book to executives, entrepreneurs and business theorists.

Raj Sisodia was the founding director of the Center for Marketing Technology and is now a marketing professor at Bentley College. He and Jag Sheth, who holds the Kellstadt Chair in marketing at Emory University’s Goizueta Business School, co-authored The Rule of Three: Surviving and Thriving in Competitive Markets, a finalist for the AMA’s 2004 Best Marketing Book award. Consumer behavior expert David B. Wolfe also is the author of Ageless Marketing: Strategies for Reaching the Hearts and Minds of the New Customer Majority.

What Is a “Firm of Endearment?”

As the U.S. population gets older, more people are reaching the “Age of Transcendence,” when they begin to focus on serving the needs of those around them rather than being motivated primarily by self-interest or ambition. This development, dubbed “self-actualization” by psychologist Abraham Maslow, has spread to the business community. More companies are building corporate cultures around service to society even as they continue working to earn profits.

These companies prosper because they endear themselves to all...

The Leader’s Greatest Return
9
Israeli National Security
8
Build It
8
Be Like Amazon
8
The Age of Agile
8
Can It Happen Here?
8