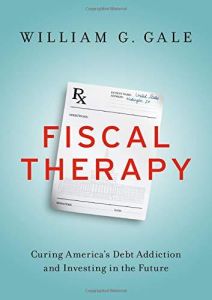 Curing America's Debt Addiction and Investing in the Future

Even before the coronavirus blew up US spending, deep tax cuts and underfunded investments had stoked massive public debt, threatening America’s economic health. In this thought-provoking work, economist William G. Gale incisively explains how tax and budget policies cripple growth and prosperity. His grounded, broad-based proposal does not include radical new ideas or punitive measures; rather, he’s assembled solid concepts from a spectrum of political voices into a cohesive, workable whole. Gale’s guidance may be all the more necessary in a post-pandemic economy.

The United States has a debt problem.

The numbers do not lie: For the year 2018, US federal outlays, at $4.1 trillion, accounted for 21% of GDP, while revenue inflows tallied $3.3 trillion, or 17%. Borrowings of $800 billion had to finance that four-percentage-point deficit. Year-to-year deficit and surplus amounts, accumulated over the nation’s history, constitute the net US public debt. That total came to $16 trillion at the close of 2018 and represented 78% of GDP. The still-standing record high is 106%, which went to fund World War II. Analysts say that annual deficits will accelerate from 4% in 2018 to 9.7% in 2050. Forecasting scenarios predict that the debt will reach between 180% and more than 200% of GDP by 2050.

Debt corrodes the economic power of a nation. Every 1% rise in deficits results in a 1% cut in domestic savings and investment. Economies grow through public and private investments that help people to upgrade their skills, enable businesses to increase their productivity and allow government to upgrade the country’s infrastructure. In turn, the...

William G. Gale is a senior fellow at the Brookings Institution and the co-director of the Tax Policy Center.

How Does Gender Equity Affect Women in Retirement?
8

Once More Unto the Breach
8

The Age of Magic Money
8

The Economic Consequences of Major Tax Cuts for the Rich
7