Summary of Fit for Growth 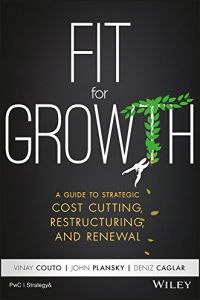 At too many companies, managers tolerate bulging budgets and fuzzy goals. But out-of-shape organizations put themselves in grave peril, argue PricewaterhouseCoopers consultants Vinay Couto, John Plansky and Deniz Caglar. In their useful guide – something of a workout plan for bloated bureaucracies – the authors exhort managers to trim the fat and stay motivated to keep it off, even after the hard work appears to be over. Their instruction manual offers clear, step-by-step directions for tackling issues such as outsourcing and budgeting. However, some readers may sometimes wish for more specific examples. Nevertheless, getAbstract recommends this overview to managers in large organizations.

Vinay Couto, John Plansky and Deniz Caglar are principals at PricewaterhouseCoopers. Couto has worked with companies in a variety of industries; Caglar specializes in outsourcing. Both are based in Chicago. Plansky, who is based in Boston, focuses on information technology.

Today’s corporations face relentless change and brutal competitive pressures. Many managers learn the hard way that complacency can be deadly, and profit squeezes can prove overwhelming. PricewaterhouseCoopers’s “Fit for Growth” approach guides executives in preparing their organizations to compete in this environment by slimming down and staying lean.

In fit organizations, the business strategy acts as a “lighthouse” – a clearly defined beacon that guides everyone in the company and those outside it. In unfit companies, the profile is flabbier. Conflicting goals and schedules crammed with meaningless meetings characterize organizations where sclerotic bureaucracies slow decision-making.

Two big-box retailers offer divergent examples of how to prepare (or fail to prepare) for growth. The what-not-to-do case study comes from Circuit City, which failed to adapt to changing competition and disappeared. After a long decline, the owner had to liquidate the chain. In contrast, Ikea has stayed relentlessly focused and is thriving.

Circuit City, whose creation dated back to 1949, was such a staggering success...