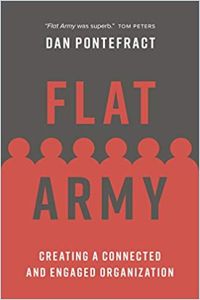 The old command-and-control management style still prevails, but it is as relevant to contemporary business as horse-drawn carriages are to transportation. Engage and empower will be the preferred management method in the future, as learning professional Dan Pontefract explains. His title uses “flat” to mean equal and “army” to suggest ships moving in unison like an armada – thus envisioning people of equal status working collaboratively. While Pontefract can be obtuse (“Think of being continuous as defining your level of leadership cadence”) or even nonsensical (“I want Flat Army to become a disease within the organization”), most of his 90,000 words make solid sense, and he writes with a refreshing, straight-from-the-shoulder style.

As head of learning and coaching, Dan Pontefract is responsible for leadership development and collaboration strategy for 40,000 TELUS team members.

The command-and-control management style that dominated business operations for hundreds of years is now completely outdated. Yet, even though smart, forward-looking corporations should immediately retire this rigid, hierarchical system, it remains the default management approach.

Command and control has significant historical roots. In 1600, Britain’s Queen Elizabeth I approved the formation of the East India Trading Company (EIC) as the exclusive commercial entity for all British trade east of Africa’s Cape of Good Hope. The EIC patterned itself after the English monarchy, which exercised absolute power according to divine right. This was the authority formula for all monarchies dating back to the Roman Empire, which first introduced the command-and-control system. EIC exercised tight, monopolistic control of all British commerce in India and throughout Asia, with 250,000 workers, a vast fleet and a rigid command-and-control management structure. At its most powerful, the EIC thus controlled more than 20% of the global population.