Guntram B. Wolff and Grégory Claeys 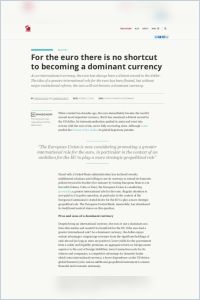 On its launch in 1999, the euro vaulted swiftly to its position as the world’s second leading currency, and flawed policies, the euro crisis and institutional miscues have kept it there ever since. The European Union is now mulling a more commanding global role for its currency, but as this scholarly report from experts Grégory Claeys and Guntram B. Wolff reveals, large-scale institutional reform is essential for the euro to compete with the US dollar for monetary preeminence and safe haven status.

Grégory Claeys is a research fellow at Bruegel, where Guntram B. Wolff serves as the director.

Many advantages accrue to the United States because of the US dollar’s reserve currency status.

The benefits of the US dollar’s global hegemony are wide-ranging: lower yields on US government debt, higher returns on foreign assets, lower transaction costs for American consumers and businesses, muted financial cycle volatility, and muscularity in foreign policy. Currency dominance helps the United States maintain its economic and financial independence.

Even so, the dollar’s strength can be a weakness when, for example, the Federal Reserve must act as the global lender of last resort, a stance that could be at odds with domestic...