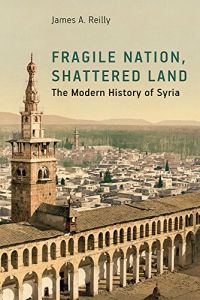 The death and destruction in Syria has grabbed headlines across the world. But for many outside the Middle East, the details of this nation’s culture and history remain obscure. Historian James Reilly explains the backstory in this study of the past century of Syrian nation-building. Reilly describes misguided colonialism, a brief and disastrous union with Egypt and nearly half a century of police-state rule under two generations of Assads. His writing style is dry, but this account provides important background that illuminates more compelling accounts of Syria’s bloodshed.

James A. Reilly is professor of history at the University of Toronto. His previous books include A Small Town in Syria and The Ottoman Cities of Lebanon.

The concept of Syria as a cohesive place is of recent vintage. It wasn’t until the late-19th century that anyone began to think of this culturally diverse place as an area calling out for nationhood. Ultimately, decades would pass before Syria would achieve independent statehood – and dreams of a democratic and stable Syria have proved more elusive still.

Syria’s ideological diversity is nothing new. In the early-19th century, modernists argued against polygamy and in favor of education for women – on the grounds that worldly mothers would be better equipped to rear capable sons. Christians and Jews readily adopted these modernist views, and monogamy quickly became the rule. But Syria’s Muslims were reluctant to abandon polygamy and women’s traditional roles.

Cultural debates came to a halt during World War I, which decimated the Ottoman Empire. Famine coincided with, and was intensified by, military conscription. Some 500,000 Syrians died of starvation and sickness. In the war’s aftermath, the British and French took control of the region: France took charge of Syria while Britain oversaw...