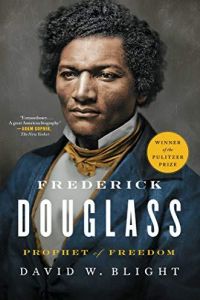 Frederick Douglass’s life reflected the United States’ struggles with race and slavery in the 19th century, and his legacy continues to inform those issues today. Historian David W. Blight’s lengthy Pulitzer Prize-winning biography draws on Douglass’s autobiographies to detail lesser-known parts of his personal journey from former slave to national leader. It demonstrates his relationship with the written and spoken word, contextualizes his biblical inspirations, explains why he merits the title of prophet, and evaluates the dichotomy between his private and public lives.

David W. Blight is director of the Gilder Lehrman Center for the Study of Slavery, Resistance, and Abolition at Yale University and the Class of 1954 Professor of American History. He received the Pulitzer Prize for this book, as well as the Abraham Lincoln, Frederick Douglass and Bancroft Prizes.

Frederick Augustus Washington Bailey was born in February 1818 in Talbot County, Maryland. His mother, Harriet, was enslaved. His father may have been Aaron Anthony, who enslaved his mother. Young Fred wasn’t close with other slaves, but was the companion of Daniel Lloyd, a white child of the Wye plantation, where both boys lived. Fred sat outside the room where Daniel and his siblings learned from their tutor. These early lessons showed Fred the power of education.

Fred went to live in Baltimore with the Auld family – Anthony’s in-laws – at age eight. Sophia Auld, the wife and mother of the household, hadn’t owned enslaved people previously. She taught Fred to read. He acquired a copy of The Columbian Orator, which he kept with him constantly. From it, he learned the concepts of religion, individual liberty and republicanism, thereby developing his antislavery ideology and providing his training as a budding public speaker.

When Anthony died, Frederick Bailey was among the 29 enslaved people that the estate divvied...

The Color of Money
9
Good and Mad
9
Searching for Boko Haram
8
The Pioneers
9
Leadership in Turbulent Times
9
Diversity, Inc.
8