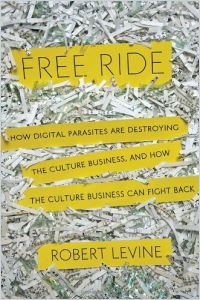 Journalist Robert Levine knowledgeably argues that ideology, inaction, misunderstanding and self-interest have created a dangerous situation in which technology is destroying culture. Fortunately, the culture industry can survive if it takes action. In this factually grounded report, Levine passionately urges the culture community – from big publishers to guitar players – to act in its own best interests and to protect its products. getAbstract recommends his treatise to those involved in culture, futurists and anyone interested in a healthy economy where creativity pays.

Robert Levine, a former executive editor of Billboard, is a features editor at Wired. He has written numerous articles for The New York Times, Fortune, Vanity Fair and Rolling Stone.

The Problem with the Online World

Once upon a time, TV, radio, film and music were highly profitable businesses, fertile with cultural innovation. During the 1980s and 1990s, for example, the National Broadcasting Company (NBC) produced numerous hit shows – including Friends, Seinfeld and Miami Vice – that shaped popular culture. In 2003 alone, NBC generated $800 million in profit. Yet by 2010, it was on track “to lose more than $100 million.” When Comcast bought a controlling share in NBC, its broadcast properties listed “an on-paper value of zero.”

What happened in those seven intervening years? The Internet. The lawless online world is wrecking traditional media companies. Online distribution often occurs outside the market: People copy songs, TV shows, movies and books, and swap them for free. “File-sharing services” provide access to an infinite number of copyrighted songs. Legal services, like YouTube, depend on professional content: Seven of its most popular videos of all time are by major-label artists.

The rhetoric critics use to frame this problem exacerbates it: This is a battle of faceless, clueless corporations fighting...