Summary of From Beirut to Jerusalem 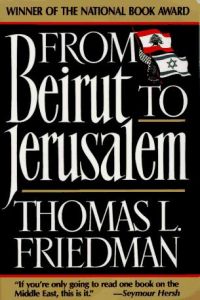 If journalism is the first rough draft of history, Friedman’s version may require only a light edit from future generations. Concisely cutting through the relentless pattern of attack and counter-attack that has characterized the Middle East for more than 50 years, Friedman finds a balance between seemingly bloodthirsty enemies. He delves into the cultural development of the peoples of the region from tribal origins, analyzing how their early struggles for survival color current events. getAbstract.com recommends this book as essential reading for any thoughtful person who wants to better understand the historical obstacles to peace in the Middle East.

Thomas L. Friedman served as Beirut correspondent for United Press International from 1979 to 1981, when he became bureau chief for The New York Times. He has won two Pulitzer Prizes and a National Book Award. Also the author of the highly regarded volume, The Lexus and The Olive Tree, Friedman is currently foreign affairs columnist on the New York Times’ Op Ed page. He lives in the Washington, D.C., area with his wife and two daughters, Orly and Natalie.

The Roots of Violence

Following World War I and the implosion of the Turkish Ottoman Empire, the area that is now Syria and Lebanon fell to France. Lebanon had two dominant religious groups: the Sunni Muslims and the Maronite Christians. In the 1920s, the Maronites convinced the French to establish a Lebanese state, which the Maronites would dominate. From its very conception, Lebanon was split not only among Christian-Muslim lines, but along Sunni-Shiite lines. And no one bothered to consult the Sunnis and Shiites about this new political division; they would have preferred being part of predominantly Muslim Syria.

The Sunni-Shiite division dates back to the death of the prophet Muhammad in the seventh century. The question arose as to who should succeed him as the spiritual and political leader, called the caliph. In desert tradition, succession should be determined by a process of election and consensus among the elders of the community. The majority of Muslims decided the successor should be chosen in this traditional manner (Sunna in Arabic means tradition). Those who held this traditional view were called Sunnis.

The Shiites saw things differently. They...