Summary of From Crisis to Calling 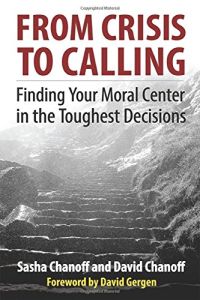 Difficult situations, or “crucibles,” shape leaders’ values and priorities. Refugee aid organization founder Sasha Chanoff and his father, experienced author David Chanoff, offer a detailed account of the crucible that tested Sasha’s fortitude. As an aid worker, he tried to help people amid violence in the Congo after the genocide in Rwanda. The authors present a gripping narrative about Sasha’s difficult time in a Congolese camp for Tutsi refugees – and of his later work starting a refugee aid organization. getAbstract recommends this searching memoir to businesspeople interested in examples of how difficult circumstances forge exemplary leaders.

Sasha Chanoff is co-founder and the award-winning executive director of RefugePoint, a humanitarian organization that seeks lasting solutions for refugees. His father David Chanoff wrote or co-wrote 19 books, and has written for The New York Times Magazine, The Washington Post, American Scholar and the American Journal of Education.

Rescuing Tutsi in the Congo

Tutsi refugees fleeing genocide in Rwanda found little welcome in the Congo, whose government launched a murderous campaign against them. Under international pressure, the Congolese regime established a so-called “protected compound” to hold Tutsi refugees for eventual evacuation, possibly so they could resettle in the United States. After only three evacuation flights, corruption and intimidation stymied the operation. But, after even more international pressure, the Congo agreed to permit one final flight.

The aid workers responsible for the mission had a set list of only 112 people the government had approved for evacuation, although the protection camp held several hundred refugees. Those 112 lives would be at risk if the aid workers tried to take any additional refugees beyond those approved. However, the aid workers found 32 women and children who’d just arrived at the protection compound after being rescued from an execution camp. The stark decision they faced was whether to limit refugees to the approved list, or to try to add these 32 victims to the flight. If that effort failed, everyone might be left behind.