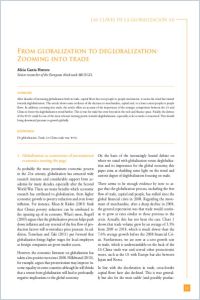 Globalization is in decline. Trade wars, an aversion to multilateralism and an enfeebled World Trade Organization are all behind a trend toward deglobalization, a move that began with the 2008 financial crisis. In this thoughtful analysis, economist Alicia García Herrero offers a sharply focused overview of the 2020s international trade climate. Her sobering conclusions bode ill for global trade and economic growth.

Alicia García Herrero is a senior fellow at Bruegel, a European think tank.

Globalization, long touted as beneficial to prosperity, is reversing course.

The second half of the 20th century saw the advent of globalization: open borders for the movement of goods, investments and people. Then the 2007–2009 Great Recession flattened world commerce. Since then, the growth in trade volume has decreased by more than half, from an average of 7.6% before 2008 to 3.5% from 2009 to 2018.

The amount of money flowing across borders also has slowed, particularly in foreign direct investment. Emerging markets have been feeling the sting since the 2010 European sovereign debt crisis. While still fluid, the cross-border movement...

The Post COVID-19 World
7
Schism
8
The China-U.S Trade War and Future Economic Relations
8
6 reasons why Africa's new free trade area is a global game changer
7
The Future Is Asian
9
How is COVID-19 affecting US trade?
8