Summary of Future-Proofing the Workforce 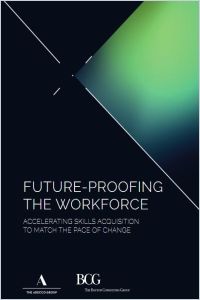 The rapid pace of technological change makes the acquisition of new skills at a similarly fast pace a must for employees and employers alike. However, closing skill gaps is often easier said than done. In this report, the Adecco Group and the Boston Consulting Group survey workers, executives and public institution officials from nine representative nations about the obstacles standing in the way of speedy, ongoing skill acquisition and possible strategies for overcoming those barriers. Ultimately, the authors conclude that what workers and businesses need most is a shift in mind-set.

Jean-Christophe Ravaux is head of global sales, Jake Schwartz is CEO and Ranjit DeSousa is president of the Adecco Group. Judith Wallenstein is a senior partner, Andreas Liedtke is a partner, Theodore Roos is a principal and Agathe Renard is an associate at the Boston Consulting Group.

Workers want to gain new skills but are unsure about which training they ought to pursue.

Workers are well aware of how developments such as AI and automation are altering and will continue to change present and future employment. Two-thirds of those surveyed believe their jobs could change profoundly at least every five years due to new technologies. Those employed in more senior positions anticipate change at a more rapid rate than unskilled workers. Despite feeling the inevitability of such changes, a majority of workers report that they lack confidence in their ability to gain the skills required to meet the coming challenges. Many fear that they will lose their jobs entirely. More than half of workers surveyed in India and Singapore are concerned about their employment. In all nations, those aged 25 to 34 years are most worried about losing their jobs as a result of tech developments.

Gaining new skills or upgrading existing ones is important to 71% of workers; yet most employees don’t see skill-acquisition as part of their job. While 87% of survey respondents report having considered training, only 10...