Summary of Get Out of Your Own Way 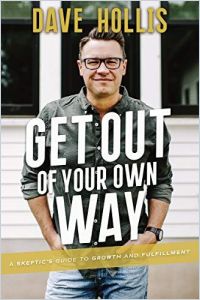 The Hollis Co. CEO Dave Hollis always thought of self-help as a crutch for “broken people.” Then his wife, best-selling author Rachel Hollis, embarked on a journey of personal growth and left him behind. As she continued to reach new heights and rack up successes, he wallowed in his mediocrity, unable to get unstuck. Finally, after a lot of hard conversations and therapy, Dave Hollis identified 20 misconceptions that got in the way of his personal development, such as “real men don’t show emotion” and “failure means you’re weak.” Using himself as a case study, he shares revelations about how to move beyond the “just okay” version of yourself to become the best you can be.

Dave Hollis is the CEO of The Hollis Co., and co-host of the Rise Together podcast. Prior to this, he worked at Disney in a variety of roles.

Recognize the genesis of your feelings, and identify the misconceptions that get in the way of your fulfillment.

Dave Hollis’s wife, best-selling author Rachel Hollis, embarked on a journey of personal growth. She read books, attended conferences and took the initiative to get up at 5 a.m. to write and exercise. Dave Hollis wanted her to succeed, but the more self-actualized Rachel Hollis became, the more stuck he felt. The feeling spurred him to start therapy – something he used to believe was only for crazy, weak or “broken people.” He had never placed himself in those categories.

In therapy, Hollis learned how to identify personal experiences inhibiting his growth, such as his belief that a “real man” hid his weaknesses and vulnerabilities. Despite many misgivings, Hollis eventually agreed to accompany his wife to a personal-growth conference. The experience was a life-changer. As Hollis learned, by gaining the tools to understand the root of your feelings and the misconceptions holding you back, you too can heal and move toward fulfillment with clarity and positivity.

Uncoupling your identity from...