Summary of Getting to Yes with Yourself 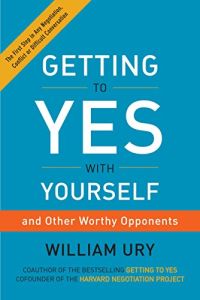 In this insightful guide to business and other negotiations, well-known negotiation specialist William Ury helps you interact more effectively in many areas of your life. Using entertaining, impressive anecdotes from high-profile conflicts he helped resolve, and sharing advice from noted psychologists and researchers, Ury takes you through his voyage of discovery. He asks, “How can we really expect to get to yes with others, particularly in challenging situations, if we haven’t first gotten to yes with ourselves?” And he explains that saying yes to yourself with compassion has to come before negotiating with others. In this prequel to his classic Getting to Yes, he walks you through six specific steps that will help you say yes to yourself: identify your motives; find alternative solutions; view problems in a new way; negotiate in a more dignified, empathic and caring fashion, and increase your value as a person. getAbstract finds that Ury’s expertise will help anyone who wants to grow, get more from life and have more satisfying interactions.

One of the world’s best-known experts on negotiation, William Ury is the co-author of Getting to Yes and the author of Getting Past No and The Power of a Positive No. Ury co-founded Harvard’s Program on Negotiation, where he is a Distinguished Fellow.

To become a better negotiator, establish a framework for your strategy and tactics by working through six important steps to greater self-awareness:

Step One: “Put Yourself in Your Shoes”

Before you negotiate with anyone else, identify what you need. Self-knowledge will help you stay focused on options that work for everyone. Brazilian entrepreneur Abilio Diniz engaged in a lengthy battle with his French associate about the ownership of a grocery chain that Diniz and his father had founded. The fight, which went on for several agonizing years, was not likely to end anytime soon. During the negotiations, Diniz often spoke out of anger, which hurt his case.

To move toward a meaningful resolution, Diniz stopped and thought about what he really wanted. At first, he listed business-related items – stock at a certain price, real estate holdings, removing a noncompete clause, and the like. But these really meant little. What he truly wanted was to enjoy his family more and to move on to other projects. “Freedom was his deepest need.” As soon as he identified this and accepted it, everything changed. Diniz took steps to ...