Review of Give People Money 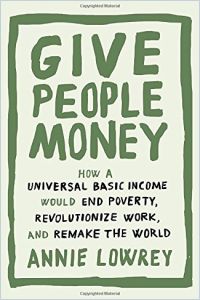 How would you feel about everyone receiving $1,000 every month, with no strings attached? This is the idea that underlies a UBI, a universal basic income for all people, irrespective of their circumstances. While the idea of handing out money “for free” might sound outlandish to some, UBI proponents have hailed it as the potential solution to poverty, welfare system injustices, political polarization and technological unemployment. In this intriguing and provocative book, economic writer Annie Lowrey examines the current revival of the UBI movement and the enormous potential of implementing such a monumental policy.

Lowrey argues that while the evidence in favor of a UBI is, in many ways, overwhelming, that fact in and of itself is not enough to make implementing a UBI successful – particularly in the United States. Embracing a UBI requires more than a change in economic policy; it requires a change in perspective, Lowrey claims. Americans would need a new understanding of what makes people’s lives meaningful – a truly revelatory notion to attach to any proposal for fighting growing income inequality.

Here are eight takeaways from Give People Money:

Annie Lowrey is an economics writer, contributing editor for The Atlantic and frequent guest on CNN, MSNBC, and NPR.

1. The concept of a Universal Basic Income (UBI) is not new.

The concept of a universal basic income (UBI) might seem revolutionary, Annie Lowrey writes, but, in fact, it has been around for a long time. For example, during the reign of Henry VIII in Britain, when land became privatized and many farmers lost their livelihood, several thinkers and economists began to consider what sort of financial help, if any, the Crown owed to its subjects. Similar arguments came to the fore during the Industrial Revolution, when technology-driven unemployment soared.

2. Many people today are struggling to earn a living wage.

Advances in technology naturally and inevitably affect jobs and the way people work. While the relentless advances in machine learning and the use of automation has not yet put humans out of work entirely, the significant changes in the job market in recent years have resulted in more and more people – in particular, families – struggling to get by. The problem, Lowrey notes, is not so much one of unemployment but of menial jobs so low-paying that they do nothing to lift people above the poverty line. These “working poor” live with the constant stress of social and economic instability, which often adds mental problems to the financial ones. In addition, there is no clear path out of this situation, as opportunities for career progression are virtually non-existent.

The New Containment
7
The Taiwan Temptation
9