Summary of Global Catastrophes and Trends 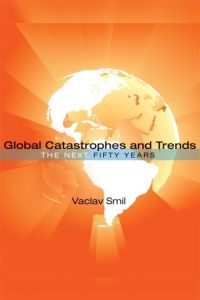 Predicting the future is still impossible, but science has gotten much better at forecasting it, at least to the extent that it is informed by statistics and probabilities. Vaclav Smil speaks the truth as he sees it, according to mathematical information and indications. For instance, he refutes the “peak oil” scenario, but asserts that society’s transition to an economy that is less reliant on fossil fuel is long overdue, environmentally and politically. Smil predicted the financial meltdown and the flu pandemic, so clearly he’s onto something. He delves into a variety of issues in this analysis of trends and calamities, from the economic decline of the U.S. to conflicts in Muslim countries, the aging of many national populations and the depletion of essential ecosystems. getAbstract recommends this fascinating account of the future as seen through the cold eye of a statistician.

Prolific science writer Vaclav Smil teaches at the University of Manitoba. His books include Energy at the Crossroads and Energies: An Illustrated Guide to the Biosphere and Civilization.

Occurences that change human history can happen as sudden disasters or as slow trends, which are more reliably predictable. Think of catastrophes as “fatal discontinuities,” from unforeseeable natural events (volcanoes, tsunamis, pandemics) to conceivable human events, like nuclear war.

For example, the events of September 11, 2001, demonstrated that “asymmetrical violence” inflicted on many people by a few could transform the world. Even if society can eliminate current identifiable terror threats, more terrorist organizations and causes would emerge. How such groups might attack is unpredictable. While threat of nuclear war between superpowers has decreased, the number of countries with nuclear capacity has increased, as have the chances of a terrorist group acquiring nuclear material. The most horrific “imaginable surprise” would be the deployment, even accidentally, of nuclear weapons.

The probability of a “transformational war,” a violent conflict that would change the global political order, is statistically predictable. Since a conservative accounting of such conflicts shows 42 years of war in the past 200 years, the likelihood...