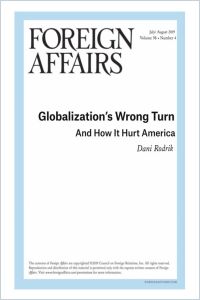 Globalization, once hailed as an inevitable, unstoppable force that will bring prosperity and freedom to all, is under attack. Yet it is not just populists who rail against the globalist credo. Economists have also started to question the merits of unrestricted global free. In Foreign Affairs, Harvard political economist Dani Rodrik explains what he believes went wrong when policymakers started to accelerate global economic integration in the 1990s – and how international economic institutions can save themselves from themselves.

Hyperglobalization, as pursued by Western policymakers from the 1990s onward, is economically and politically unsustainable.

In the 1990s, Western leaders including US President Bill Clinton and UK Prime Minister Tony Blair likened globalization to a natural law. They saw globalization as a process that, if left to unfold without restrictions, would inevitably lead to a more prosperous and peaceful world. The World Trade Organization, established in 1995, and the regional free trade agreements that followed required signatory states to subordinate the needs of their domestic economies to the imperatives of a liberalized global economy. Likewise, global organizations like the International Monetary Fund promoted the globalization of financial markets, enabling financial institutions to move large sums of money across international borders in pursuit of short-term financial gain.

Yet many ordinary citizens started to...