Summary of Goddess of the Market 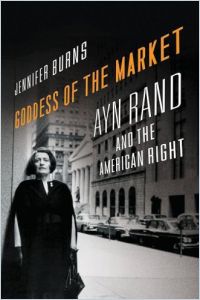 To understand the US far right’s intellectual underpinnings and resolve, you must know Ayn Rand, the influential Russian Jewish immigrant and author. This enigmatic woman’s ideas about reason, individualism, personal freedom and the importance of a free market shaped and continue to shape modern conservatism. Rand articulated a hero-role for the individual in her two best-known novels, The Fountainhead and Atlas Shrugged. Her contempt for the altruistic and collectivist and her praise of individuality inspired business leaders. Rand – who died in 1982 – was as idiosyncratic as her novels’ protagonists and was seldom an ally to Republicans or libertarians. Author Jennifer Burns describes Rand’s bizarre private life, in which she tried to reconcile a new philosophy, an unconventional romantic vision and the emotional storms she created. getAbstract recommends this compelling biography as a great story and essential reading for those seeking to understand where the far right finds its convictions. As the Republican Party seeks an identity that’s paradoxically inclusive and traditionally conservative, Rand’s life serves as liner notes.

Jennifer Burns is an assistant professor at Stanford University, where she teaches American political, cultural and intellectual history.

Alisa Rosenbaum turned 12 as the Russian Revolution unfurled in 1917. She was the daughter of a chemist and his emotionally charged wife. Alisa’s family of five lived in St. Petersburg and had servants and a summerhouse in Crimea, until the revolution shattered their lives. Her father lost his business and in the mid-1920s, after selling their last heirlooms, the family faced starvation.

Alisa was unusual, unforgiving, unrelenting, always uneasy with small talk and convinced she was a “child of destiny.” In high school, she found the first rudiments of a belief system: the heroic notion of the individual and the beguiling power of reason. At tuition-free Petrograd State University, she experienced diversity and Marxism. The writings of Nietzsche captured her imagination. When Russia exiled anti-Marxist students and professors, she was forced to withdraw for a time but “the policy was later reversed and she returned.”

Hollywood movies instilled in Rand an overwhelming desire to go to America. In 1926, after months of family intrigues, she left Russia. She arrived at the home of cousins in Chicago with a new name made from an abbreviation of her...