Summary of Google Searches Its Soul 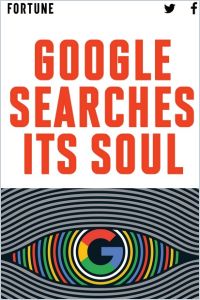 In recent years, Silicon Valley workplace statistics show that tech companies increasingly find themselves inside a homogeneous bubble. In a Fortune magazine analysis, writer Ellen McGirt interviews Google employees to discover how the company is working to become a more inclusive employer, in part, to strengthen its competitive advantage. getAbstract recommends this article to everyone interested in Google, Silicon Valley and diversity issues.

Every year, Google handles 80% of all Internet queries, and its “consistent refinement of its algorithmic wizardry” has demolished competitors. But the company’s Achilles’ heel could be a lack of diversity. In 2016, the company’s US-based workforce was 71% male and 57% white. Asian employees made up one-third of the staff – but only 5% were Latino, 2.4% were black, 1.8% were mixed race and less than 1% identified as “other.”

As the world around the Googleplex shifts, so must its products adjust to keep its otherworldly ability to serve up the correct information.

So why is Google embracing change? After a series of stumbles, a PR boost could be one reason, while another could simply be to grow and better serve users. For example, in 2015, the company’s photo search tool started tagging black people as gorillas. Bradley Horowitz, who was leading Google Photos at the time, has said that if the team were more diverse, it would have observed the problem sooner.

Over the past few years, the corporate world has had a powerful awakening on the subject of race, diversity and inclusion.

To shore up diversity, the company is zeroing in on “hiring, inclusion, education and communities.” So far, 73% of employees have participated in “antibias training and hiring, and promoting practices,” and recruiters are looking beyond just a few elite universities to fill positions. The company is also supporting science, technology, engineering and math community projects in Harlem and Oakland. Critics, though, question Google’s seriousness because it’s taking a crowdsourced approach instead of imposing one from the top down. However, Alphabet’s senior vice president of corporate development and chief legal officer David Drummond says the company is opening itself up to “scrutiny” and welcomes the “outside pressure.”

While cautioning patience, Google executives are confident that the organization’s embrace of diversity will begin to show up in its workforce soon.

After talking with “Googlers” – company employees – it’s clear that “outside perspectives are enriching the company’s business.” Take Adriana Jara, a 33-year-old Costa Rica native who joined Google in 2013. Jara struggled on her first team because it was too homogenous. Today, though, she’s working on a diverse team for Google’s shopping product and says her unique perspective is an asset. Jara is helping the company to understand how Latin American shoppers think (in this market, price is more important than shipping time), is working as a Google ambassador and recruiter, and has her eye on bolstering “social and mobile technologies” in Latin America.

Infocalypse Now
7
The Secrets to Designing a Curiosity-Driven Career
10
The Future of Work Looks Like Staying Out of the Office
8
If You Cut Employees Some Slack, Will They Innovate?
0
The Internet Apologizes…
8
An Ethics Guide for Tech Gets Written With Workers in Mind
8