Summary of Governing by Network 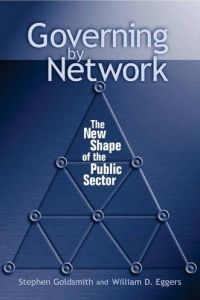 The average citizen may not notice it, but government is rapidly changing. Nongovernment workers are now delivering services that the government used to deliver as recently as a decade ago. As public policy specialists, authors Stephen Goldsmith and William Eggers know this area well. Their book is full of dense organizational descriptions, which come to life only when they use real-world examples. Fortunately, they do so often, presenting interesting facts and case studies. Still, this book is intended for serious students of public policy and government. Numerous checklists bog it down and may not be practical to use. getAbstract.com recommends it to public officials, policy-makers and citizens who want to understand trends in government and the ways that governing by network is changing the political scene.

Stephen Goldsmith, mayor of Indianapolis from 1992 to 1999, is a professor of government at Harvard University’s John F. Kennedy School of Government. He chairs the Ash Institute for Democratic Governance and Innovation and the Manhattan Institute Center on Civic Innovation. He is the author of The 21st Century City. William D. Eggers is the global director at Deloitte Research, Public Sector, a senior fellow at the Manhattan Institute and a contributing writer to Public CIO magazine. He is co-author of Revolution at the Roots.

The National Park Service Cleans Up

Since 1916, the U.S. National Park Service had administered the nation’s parks by itself, without any input or assistance from the private sector. Then, in 1993, hundreds of acres that formerly comprised the Presidio military base, adjacent to the Golden Gate National Recreational Area in San Francisco, became part of the service’s domain, and it discovered it had a problem. Much of the new land was contaminated. Removing the 87,000 tons of chemicals and debris from the area would cost millions.

To fund the site cleanup, the service made an unusual request. Rather than ask Congress for additional funds, it went to the private Golden Gate Conservancy, which maintains 1,000 buildings and 76,000 acres inside Golden Gate Park and other local scenic areas. After the Park Service presented its case and showed the Conservancy what it would be able to offer the public once the site was cleaned, the Conservancy started a fundraising campaign. To everyone’s surprise, the group raised $34 million to clean the site. The money supplemented $100 million the Conservancy had raised with the help of other nonprofits since its inception in 1972.