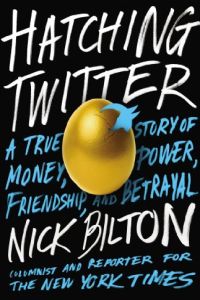 New York Times tech reporter Nick Bilton presents the enthralling story of Twitter’s four hacker-engineer founders – Evan “Ev” Williams, Jack Dorsey, Biz Stone and Noah Glass – and their constant infighting, mismanagement and power struggles. Bilton documents Twitter’s “hatching” and – though tech junkies may find the focus on personalities and conflicts rather than technology disappointing – most readers will be instantly absorbed. getAbstract recommends this engrossing start-up biography to investors, entrepreneurs, fans of Twitter and those who enjoy a good corporate tussle. Bilton’s story takes up far more than 140 characters, but every word is worth it.

Nick Bilton is a reporter for The New York Times, a popular technology blogger, and author of I Live in the Future & Here’s How It Works.

Ev Williams moved to California from his family’s farm in Nebraska in 1997 to take a position as a marketing copywriter for O’Reilly Media. After working for Intel and Hewlett-Packard and teaching himself how to write code, Williams formed Pyra Labs with his girlfriend, Meg Hourihan. He developed Blogger, a diary site, and released it without Hourihan’s consent. Their relationship fell apart, and Williams ran the company alone out of his apartment.

When the site began to earn money, Williams opened an office and hired programmers. By 2002, one million bloggers used the site. Jason Goldman joined the company as office manager. The site’s slogan, “Push-button publishing for the people,” summarized Williams’s philosophy: Democratize publishing and give everyone a voice, regardless of their beliefs or politics.

Noah Glass read about Williams and Blogger in Forbes magazine in 2002 and recognized – in a photo in the article – that it was based in the apartment across the street from his. Glass shouted from his balcony and introduced himself to Williams. The two became fast friends. Glass, enthusiastic with a frenetic imagination...