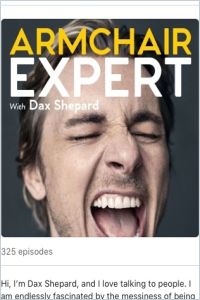 Aged 11, Heather McGhee moved away from home to attend an almost exclusively white boarding school in a predominantly white town. She soon had a revelation: In terms of grit, smarts, merit and discipline, the families of the wealthy white kids didn’t differ much from her own middle-class family or the working-class families she knew. This knowledge inspired McGhee to explore economic disparity, racism, and the effect both have on all Americans. McGhee’s conversation with Dax Shephard and Monica Monsoon is as enlightening as it is engaging.

Armchair Expert is a weekly podcast about the “messiness of being human,” hosted by actor, director, and writer Dax Shepard and Emmy-nominated Monica Monsoon. Heather McGhee is a commentator, speaker, writer, and a distinguished senior fellow and former president of Demos, a progressive US think tank. She works as an NBC News political analyst and chairs the board of Color of Change, the largest American racial justice organization.

Racism hurts everyone, economically and otherwise.

Americans, particularly white Americans, believe that the economy is a zero-sum game – that more for one group means less for another. This was particularly true in the time of slavery, when slave owners profited from free labor. In reality, slavery brought prosperity only to the very small number of white people who owned plantations. Meanwhile, the system disadvantaged the vast majority of white people who couldn’t find jobs because work went to enslaved Black people.

The detrimental effects of racism on all members of society persisted long after slavery. In 1940s Montgomery in Alabama, Oak Park – the city’s main community park with a swimming pool and a zoo – was open only to white citizens, even though everyone’s taxes paid for it. In 1959, desegregation laws ordered the city to let Black families into Oak Park. In response, town officials decided to drain the pool and close the zoo. The entire community suffered.

Working Women: Valerie Jarrett and the Importance of Mentorship
9
Leadership Lessons with Shellye Archambeau and Sheryl Sandberg
8
The Future Of Talent Acquisition
8