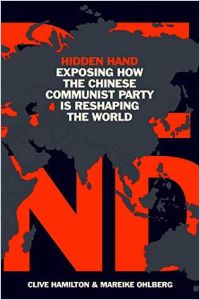 Despite the signs of increasing authoritarianism, many in the West continue to hold out hope that the Chinese regime will, eventually, shift to a more democratic style of rule. That story is a fairy tale, write Clive Hamilton and Mareike Ohlberg in this bracing takedown of China and its role in the world. The authors argue that today’s Beijing employs many of the propaganda techniques used by Soviet-era Moscow. Xi Jinping and the Chinese Communist Party despise dissent, crave control, steal compulsively and manipulate rivals at home and abroad. Westerners must accept and adapt to this reality.

Clive Hamilton is an Australian author and academic. His previous books include Silent Invasion and Growth Fetish. Mareike Ohlberg is a Berlin-based researcher who focuses on Chinese influence.

China spreads deceit across the globe.

The Chinese Communist Party (CCP) actively undermines democracies everywhere. China has stolen commercial secrets, spread fear and successfully co-opted elites in the United States, Europe, Canada and Australia. Westerners, meanwhile, continue to hold out hope that, as China prospers, it will shift from an authoritarian regime to a more open, democratic state. Such hopes are unfounded. Instead of becoming more like Western democracies, China has aggressively attacked them, and the CCP has doubled down on its despotic tendencies.

The CCP remains a Leninist regime – one that’s openly hostile to democratic values of free speech, human rights and religious diversity. The CCP’s Soviet-style system sees enemies on all sides and continues to pursue Cold War tactics. Yet many in the West stubbornly downplay China’s dark ambitions, arguing that criticism of the CCP is somehow racist or unfair. The CCP buttresses such arguments by claiming to speak for all Chinese people – despite considerable dissent within China and among the Chinese diaspora. As part of its efforts to control the narrative...