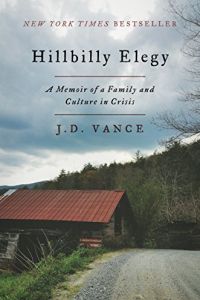 For decades, the lower-caste white people of the Rust Belt were the invisible face of American poverty. But in 2016, Donald Trump rode to the White House on a wave of white working-class rage in Ohio, Michigan, Pennsylvania and Wisconsin. J.D. Vance’s memoir, which rocketed to the top of The New York Times and Amazon bestseller lists, sheds new light on this underclass. Vance became a media sensation by offering a coherent explanation for why so many white voters went against their economic interests and voted for a wealthy political outsider.

After enlisting in the US Marine Corps, J.D. Vance attended Ohio State University and Yale Law School. He is a principal at a leading Silicon Valley investment firm.

Vance escaped his hardscrabble upbringing to graduate from Yale Law School. He delivers an honest, evocative account of his life and the lives of many Appalachians who migrated to Rust Belt towns. “I identify with the millions of working-class white Americans of Scots-Irish ancestry who have no college degree,” Vance writes. “To these folks, poverty is the family tradition.” He regards white people from the Kentucky coal country, people like his ancestors, as tough, loyal and suspicious of outsiders. They fight, feud, drink, take drugs, steal and loaf. Despite their flaws, he feels a deep sense of belonging to this tight-knit society.

His family of Kentucky natives moved to a working-class town in Ohio in search of work. Vance describes his kin as deeply dysfunctional. His mother battled drug addiction and was a volatile, corrosive person who once threatened to kill her son. Vance’s father was comforting but made only occasional appearances in the young boy’s life. His grandparents Mamaw and Papaw raised him. These two plainspoken hillbillies, despite their chronic chain-smoking and lack of education, put Vance on a path to escape the poverty trap that still ensnares most of childhood compatriots.

55, Underemployed, and Faking Normal
9
The Color of Money
9
Women, Minorities, & Other Extraordinary People
9
Lying for Money
8
#Republic
8
The Talent Revolution
8