Summary of His Very Best 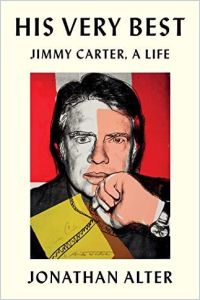 Journalist Jonathan Alter’s extensive biography reports that former Naval officer and one-term US president Jimmy Carter is an underappreciated peacemaker who defused conflict in potential war zones in Central America, the Middle East and Asia. In 1978, Carter’s dogged dedication to diplomacy helped Israel and Egypt agree on the historic Camp David Accords, which prevented war between the two countries. Carter also pushed to return control of the Panama Canal to Panama. Alter highlights Carter’s accomplishments and the problems that overshadowed them.

Award-winning author, columnist and documentary filmmaker Jonathan Alter’s three bestsellers include The Center Holds: Obama and His Enemies (2013), The Promise: President Obama, Year One (2010), and The Defining Moment: FDR’s Hundred Days and the Triumph of Hope (2006).

Jimmy Carter witnessed the legacy of slavery during his childhood in Georgia before serving as a Naval officer.

Carter’s ancestors owned enslaved people and land that the state of Georgia took from the Creek Indians in 1825 and sold to white settlers. Carter’s father had Black tenant farmers. Carter’s mother Lillian, a nurse, treated Black patients and delivered their babies, usually for token compensation.

Most of Carter’s family farm playmates were Black, so in 1930, when he started attending an all-white school in his hometown of Plains, he felt like an outsider, a persona he embraced in politics. In June 1943, Carter attended the US Naval Academy and joined the Naval Reserve Officers Training Corps.

Rosalynn Smith graduated from Plains High School and married Jimmy, age 21, in 1946 when she was 18. They have four children – Jack, James III (“Chip”), Donnel (Jeff) and Amy – eight grandchildren and eight great-grandchildren. As of July 2020, the Carters had been married 74 years.

Carter became a submarine officer and gained promotion to full...